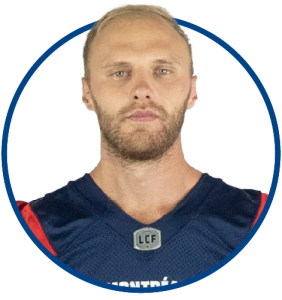 ACQUIRED:
Selected in the first round, eighth overall, in the 2021 CFL Global Draft.

CAREER:
2021: Selected in the first round, eight overall, in the CFL Global Draft…Appeared in 12 regular season games…Recorded nine punts for 380 yards in his CFL Debut August 5 at Winnipeg…Recorded nine punts for 416 yards September 6 vs. Toronto…PLAYOFFS: Dressed in all three playoff games.
CAREER HIGHLIGHTS:
First CFL Game – Aug 5/21 at WPG

COLLEGE/PERSONAL:
College: Appeared in 38 games over three seasons as the primary punter at the University of Washington (2017-19), posting 5,121 yards on 119 attempts for an average of 43.0 yards per punt…Was a 2019 All-Pac-12 Honourable Mention and a 2018 Academic All-Pac-12 Honourable Mention during his career with the Huskies…He also spent time at Santa Barbara City College before transferring to Washington.