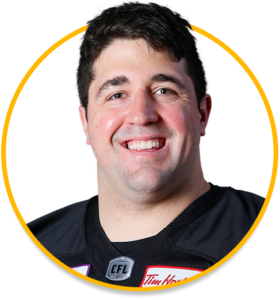 ACQUIRED:
Selected by the Hamilton Tiger-Cats in the sixth round, 52nd overall, in the 2014 CFL Draft.

CAREER:
2018: Appeared in 13 regular season games at centre and guard, starting once at centre…Missed five games due to injury…PLAYOFFS: Appeared in both of the Tiger-Cats’ playoff games.