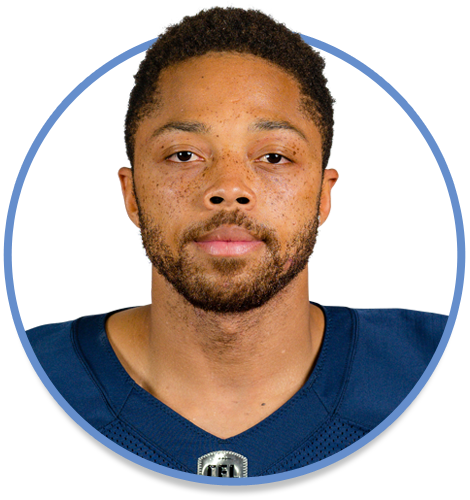 Acquired: Originally signed as a free agent on January 27, 2017.

2019: Played in 3 games, started all 3. Finished the season with 12 catches for 129 yards and his first CFL touchdown, October 18 at Montreal, a 2-yard pass from McLeod Bethel-Thompson. That night against the Alouettes he had 9 catches for 93 yards.

2018: Spent training camp with the Argos but was released June 3. Signed with Argos October 10 and spent the remainder of the season on the practice roster.

2017: Signed with Toronto Argonauts January 27. Played in 4 games. Caught 1 pass, a 5-yarder from Ricky Ray on September 16 against Edmonton. Made CFL debut June 25 against Hamilton. Also used on kickoff and punt returns. Playoffs: Did not play in Eastern Final win over Saskatchewan. 105th Grey Cup: Did not play in 27-24 win over Calgary.

2015: Signed with Houston as an undrafted free agent on May 8. Played 3 games. Finished with 3 catches for 13 yards.

College: Attended Troy University (2011-14). Played 47 games. Recruited as a defensive back but was flipped over to receiver where he made the Sun Belt All-Freshman Team. As a senior he caught 44 passes for 428 yards and added a pair of touchdowns on returns.

Personal: Attended Griffin High School. Played both offence and defence. The Bears finished 13-1 in his senior year. Was on the 4 X 100 track team that finished second at the state relays.